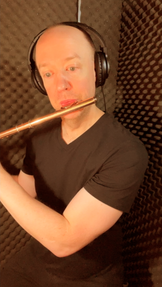 Todd Groves lives and performs in NYC on saxophones, flutes, clarinets, recorders, and world flutes in a range of styles from commercial music to jazz, classical, and world music.  He can be heard regularly in Broadway pit orchestras, on concert stages, in clubs, and on many recordings.

Since its opening in 2014, he has been the Reed 1 player for Disney’s Aladdin on Broadway, playing flute, piccolo, alto flute, clarinet, and alto sax.  Since 2009 he has been in the orchestra for the Radio City Christmas Spectacular, a position earned by winning an audition each year.  He has also been a regular member of NY City Center’s Encores orchestra, performing for over 20 shows in their acclaimed revival series since 2008.

Since moving to NYC in 2005 from the Philadelphia area, Todd has held chairs in the Broadway shows:

Shows at NY City Center for Encores!, Off-Center, and Summer Stars series:
Mack and Mabel, High Button Shoes, I Married an Angel, Call Me Madam, Grand Hotel, Hey Look Me Over!, Assassins, The New Yorkers, Sunday in the Park With George, Runaways, Cabin In The Sky, Paint Your Wagon, Little Me, Fiorello, On Your Toes, Damn Yankees, The Wiz, Anyone Can Whistle, Merrily We Roll Along, Runaways, Cradle Will Rock, Faust

Todd is an active composer, focused on original compositions for woodwinds and jazz ensembles of various sizes. His Active Agenda for sax quartet and percussion ensemble was premiered by the NJSQ at the 2018 World Saxophone Congress in Zagreb, Croatia, and his Delaware Jazz Suite quartet was premiered by them at the 2006 WSC in Ljubljana, Slovenia, with a subsequent American premiere at Carnegie Hall. His other compositions have been performed at the International Saxophone Symposium and other national conventions.

Todd is a member of UD's Faculty Jazz Ensemble, performing regularly on and off-campus.